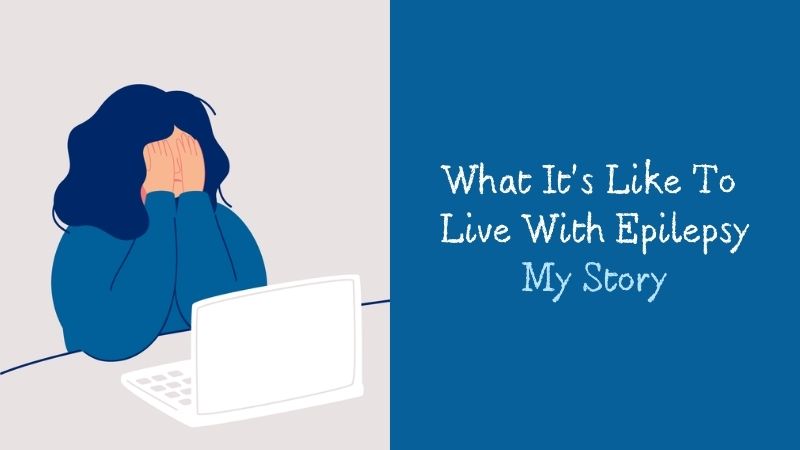 “At first, it was scary to go out alone: how I live with epilepsy… and suffer from the side effects of drugs.”

This text was written by a member of the Epilepsy Foundation support group. We carefully edited the story and formatted it according to editorial standards.

This is what I heard after my first epilepsy attack. I was 21 years old.

Everything happened quite abruptly, and nothing foreshadowed trouble. February 2013, I’m on a bus to the university and figure out how to squeeze through the crowd to get off at the bus stop. And the next moment there is no one around except the driver, the conductor and one passenger who are looking at me anxiously.

My head hurts terribly with some kind of pain unfamiliar to me, the jacket is in the mud because I fell to the floor during the attack, the dial on the watch is broken. The man tells me something about his brother having a similar story and calls an ambulance.

The ambulance doctors said it was “an attack of unknown etiology”, but later I learned that it was the first attack of epilepsy – with loss of consciousness and convulsions.

Epilepsy is a disorder of the central nervous system in which the electrical signals in the brain are distorted. Because of this, a person has seizures: uncontrollable twitches, loss of awareness and gaze into space, strange sensations – distortions of tastes and smells, tingling in the limbs, loss of consciousness. The WHO estimates that 4 to 10 people in 1,000 suffer from epilepsy.

Epilepsy can occur at any age but more often begins in childhood or after age 60. Causes cannot be determined in about half of the cases, but it is suggested that the risk of getting sick is higher in people with developmental disorders, such as autism, a genetic predisposition: one in three people with epilepsy has a family member with the same diagnosis.

Even the development of the disease can be affected by head trauma, brain tumors and vascular anomalies, stroke, infections, such as meningitis and viral encephalitis, features of intrauterine development: trauma, infection in the mother, poor nutrition or oxygen starvation.

Epilepsy is usually diagnosed when a person has at least two sudden seizures within a day. For diagnosis, they use electroencephalography, magnetic resonance imaging, computed tomography. EEG can detect changes in the pattern of brain waves, while MRI and CT can help rule out other causes of seizures, such as brain damage or neoplasms.

If the seizures last longer than five minutes or if a series of seizures occur without full recovery of consciousness between breaks, the person may be diagnosed with status epilepticus and are at increased risk of permanent brain damage and death.

Antiepileptic drugs are usually used for treatment: if a person with epilepsy has not experienced seizures for at least two years, the doctor may cancel them. If medications don’t help, doctors may suggest surgery to remove the area of the brain that causes seizures. This does not always completely relieve the patient of seizures, but it can reduce the amount and dose of medication that needs to be taken.

Stimulation of the vagus nerve can also affect seizures: for this, a special device is implanted under the patient’s skin. This method can reduce the number of seizures by 20-40%.

How I was diagnosed and treated

An hour later, I was taken to the hospital by ambulance, they put me on a drip, it seems, with saline, they did a brain MRI and I was diagnosed with epilepsy. After that, I spent eleven days in the hospital under the supervision of doctors: every day I was given droppers, but I don’t remember their compositions.

When I left the hospital, I made an appointment with an epileptologist at Houston Epilepsy Center. The doctor asked to tell how it all started and prescribed treatment – Sodium Valproate 300 mg per day. 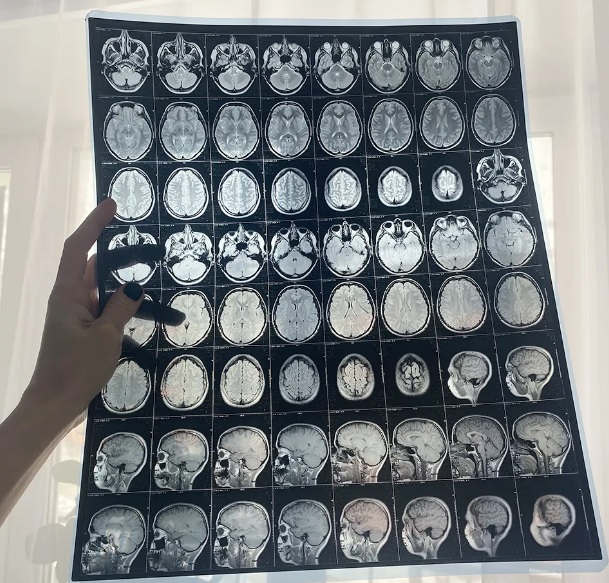 This is one of my MRIs. When I took a brain MRI, I was a little scared from the loud and sharp sounds of the machine, and there were also unpleasant sensations: dizziness and a feeling that the blood inside me became very hot.

This did not help, the attacks continued every two or three days. I lost consciousness, and my body was fettered by convulsions, this constantly hurt my head and sometimes my muscles, at first it was scary to go out alone. Therefore, a month later, the doctor prescribed me another drug – Tegretol. Although these pills were expensive, I managed to find an affordable option at Trust Pharmacy SandelCenter. I purchased a 100-pill pack for only $89. If you use a coupon code, then the price is even lower. These pills helped!!! The attacks went away in a couple of days. I took Tegretol every day without a break so that everything would not start again.

Although I stopped suffering from seizures, the epileptic activity of the brain persisted, as evidenced by the results of regular electroencephalography – a brain examination. I did an EEG every three months – it was free, but once a year I was recommended to undergo a two-hour EEG, during which you need to try to fall asleep – it cost about $00.

I never found out WHY my attacks began. No one in the family had epilepsy. The first epileptologist suggested that the attack could be associated with a sip of whiskey, which I drank the day before. Two years later, I went to another clinic for treatment – Neurology Consultants of Houston where doctors explained that the disease was triggered by intrauterine oxygen starvation.

How I discovered double vision

Epilepsy didn’t bother me at all. All that the doctor recommended, except for pills, was less alcohol and healthy sleep: at least eight hours a day, going to bed and waking up at the same time. I had to give up working as a bartender (not because of alcohol but because I didn’t get enough sleep with this job).

But then hell broke loose. About four years after starting the medication, I developed double vision: it appeared when I looked into the distance (two meters or more). At first, I had double vision only when looking down, but gradually the symptoms worsened: after a few months, double vision began to occur when looking down and straight, and later also when looking to the side. In the summer of 2020, the situation worsened a lot, and I wore prismatic glasses.

Then I didn’t know yet that the possible reason was in the drugs: the epileptologist who prescribed the drug to me said that this was not his area of responsibility. Another epileptologist said that if it was a rare side effect, it would show up right away, not years later.

As a result, in order to find the cause, I consulted ophthalmologists, neurologists and psychotherapists, took blood tests, did an MRI of everything I could, read medical forums in an attempt to find the cause. I live in Houston but I visited doctors in other cities and even countries: I was examined in Minnesota, Florida and Arizona and even in Germany where my relatives live. Everyone shrugged and said they didn’t see the problem.

I don’t remember exactly how much money I spent on all this, but I think about $10,000, including flights and rental housing.

As a result, the cause of double vision was discovered not because they did some kind of correct analysis but because there was nothing more to investigate. A neurologist from the Johns Hopkins Epilepsy Center suggested that double vision could be a side effect of anticonvulsants. There is a possibility that the medication caused nystagmus – uncontrolled eye movement, which is why double vision appeared.

As a result, the doctor changed the pills for epilepsy to more expensive ones. The double vision did not go away but it stopped progressing – because of this, I am still not completely sure that double vision was caused by the drugs I used.

How I live with epilepsy and double vision now

Epilepsy and double vision will stay with me forever. Mom worried about this for a long time, and about six months after the diagnosis, she had a nervous breakdown. Friends and relatives were very supportive.

I don’t care: well, I have epilepsy and can do nothing with it. Now attacks occur rarely, about once every six months. But I suffer from double every day – and it does not interfere significantly with my daily activities…

Yes, double vision hit my self-esteem and quality of life hard. I often stood at the mirror and watched the movement of my eyes, especially the right one. Then I began to notice that I was having strabismus – the eye began to go into the inner corner. I am not able to do anything about it. Since now the doctors are not completely sure what the matter is, they also cannot find ways to fix the situation.

Double vision also affected the perception of the world in the physical sense of the word. On days when the double vision was too strong, I could not do anything normally – walk, watch a movie, even vacuum: I looked at the hose from the vacuum cleaner and could not understand where it was, to the right or to the left of me. This spoiled my mood, I cried, I was afraid of the future.

I was afraid that my eyesight would become so bad that I would not be able to provide for my own life.

During this time, I managed to get over depression, I was diagnosed with an anxiety disorder, I wanted to end my life… Now I try to learn to live with it further. I am a rebel by nature, and if I don’t like something, I won’t even waste my time. And this situation is hell for me, as I feel powerless in trying to change something for many years.

I stopped being afraid of antidepressants: living with double vision becomes completely sad without them, although these drugs do not always save. I also found several good sites and YouTube channels about evidence-based medicine, I began to read more scientific pop and I always watch how the doctor talks, what tests he prescribes and, most importantly, what treatment he prescribes.

Once, an epileptologist prescribed me Cocarnit for double vision, which cost a lot of money. I was glad that she might have found the cause of double vision and a cure for it. I went to the nearest pharmacy, bought medicines, and only then read that it was useless. That was the last time I blindly trusted a doctor.

The same drug was then prescribed to me by a psychotherapist and then also by a psychiatrist. I didn’t buy it anymore, and I didn’t return to those doctors.

Now I spend about $600 on treatment per month. Of these, I spend about $100 on medicines, the rest – for appointments with an epileptologist and consultations with a psychotherapist twice a month. I get an EEG once every six months – it costs about $100.

Thank you for reading! I hope my story of struggle and hope will help inspire you to never give up! Just remember that it IS possible to live a normal life with epilepsy!