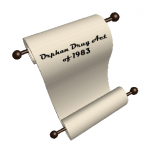 Approximately 5,000 rare diseases have been identified. 10-20 million Americans suffer from rare diseases, 50% of which are pediatric patients. A disease is considered rare or ‘orphan’ when the prevalence in the United States is less than 200,000. The diesease is termped ‘orphan’ because the pharmaceutical industry historically has not had an interest in developing treatments for these small patients populations. Drugs that have been FDA-aproved for use in these patients populations are termed orphan drugs.

The Orphan Drug act of 1983 is a public policy that was established under the Reagan administration in response to the limited number of medications that had been FDA-approved for the treatment of rare diseases. At the time of inception, less than 15 drugs had been approved for the treatment of rare diseases. MOst of the therapy options ofr these patients came from “off-label” uses, with limited clinical datat to support the safe and efficacious use in these patients.

Drug development is a lengthy and expensive process for drug companies. Profits from the sales of orphan drugs do not come close to the profits achieved from the sales of drugs that are indicated in the general population. In fact, drug companies often incur a loss from the development of orphan drugs because of the small patient-population in which orphan drugs are indicated. The Orphan Drug Act allows the federal governemnt to assist in the development of medications for rare diseases. Specifically, the Act allows the federal government to provide incentives to drug manufactures in order to help defray the expense of producing an orphan drug and to optimize profits from sales of the drug.  These incentives are a means to increase drug manufactureres’ willingness to and motivation to devlop drugs for the underserved patients suffering from rare diseases.  The incetives given to drug manufacturers are a seven-year patent on the drug post-FDA approvsal, a 50% tax credit on the clinical costs of drug development, waiver of the FDA application fee, assistance with the drug development process, and grant funding.

Since 1983, more than 1,414 orphan products (drugs, biologics, and devices) have been produced.  265 of these products have been approved, 209 of which are drugs for use in rare diseases.  This is a significant increase from the less than 15 orphan drugs approved at the time that the Orphan Drug Act was created.  As a result of th Act, survival is being prolonged and quality of life is being improved for many pregiously underserved patients suffering from rare diseases.